Product: Lipo 6 Black
Manufacturer: Nutrex Research
Benefits: Claims to be a powerful weight loss formula suitable for men and women
Positives: Reputable manufacturer, good ingredient profile
Negatives: Not as effect as leading fat burning supplements
Shipping: To most countries across the world
Retailers: Can be purchased from the Nutrex online shop as well as several other online weight loss supplement stockists

Which fat burners are most effective – click to see poll 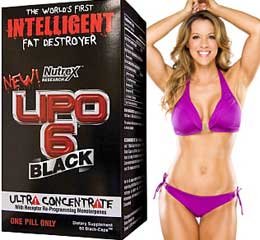 Lipo-6 Black is a weight loss product manufactured in the USA by Nutrex. The formulation is designed to help users attain their weight loss goals by providing fat burning and appetite suppressing benefits.

Formulations that provide appetite suppression can help the user avoid the temptation to overeat or snack between meals, and can be very effective for maintaining a lowered calorie intake. Fat burning products trick the body into burning its existing fat stores. When combined, appetite suppression and improved fat burning abilities can deliver fast results, but the range and quality of results obtained is dependent on the quality and quantity of the ingredients used.

Lipo6 Black does appear to taget a male audience with its advertising material and webs content but it is suitable for women as well. There is also a product in the Nutrex range called Lipo6 Black Hers – which is exclusively for women

Four capsules provide 504.5mg of the Lipo-6 Weight Loss Formula. It’s a proprietary blend, so no inclusion rates are available, but the ingredients that make up the blend are:

Three capsules are required each morning. A further three capsules should be taken in the afternoon. Doses should be timed so that the capsules are taken half-an-hour before eating a meal, but should never be taken within six hours of going to bed. Supplementation must be stopped after 60 days of use, but can be recommenced after 15 days of non-usage.

A few customers claim the product does not work, but the majority of customer testimonials suggest otherwise.

“A friend urged me to try these so I did, but they had no effect whatsoever. One month in and I still weigh the same. No extra energy, No appetite suppression, no fat burning. I feel very let down.”
“Wow! All I hoped for and more. Lipo-6 keeps my appetite in check, and appears to be a very powerful fat burner, but it does not cause any of the nasty side effects other diet pills do. I recommend you try it, you won’t be disappointed.”
“Fantastic fat burner! It really works. I can’t believe how easy these capsules have made it for me to lose weight. I’ve already ordered a second bottle.”

here are a few negative comments

I cant understand the positive comments it has not worked for me
waste of time for me – didn’t work at all. want my money back

The manufacturers state Lipo-6 Black is not suitable for anyone who is under the age of 18 or for pregnant of breastfeeding mothers. They also warn against taking the capsules alongside anything that may provide additional quantities of synephrine, yohimbe, caffeine, or any substance that is likely to boost thyroid activity.

Examples of prohibited foods/medications include:

According to the label on the bottle some people should always seek medical advice before using Lipo-6 Black.

Examples of unsuitable users include, but are “not limited to” people who are taking:

Anyone who has an existing medical condition of any kind is warned to seek medical advice prior to using Lipo-6 Black. The label also points out the formulation contains ingredients that might be banned by some sporting associations. 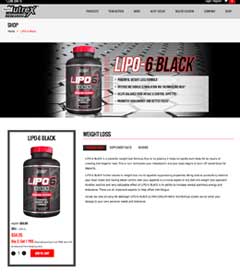 Lipo-6 Black has a MSRP of $59.95 US per bottle (120 capsules) but the official website often offers customers a $5 discount.

It is also possible to buy Lipo-6 Black via a number of independent online retailers including GNC and Dolphin Fitness, and many third party sites slash the MSRP by up to 50%, so significant savings can be made.

Nutrex does not back Lipo-6 Black with a money guarantee.

We prefer PhenQ – as a fat burner it is arguably the best selling commercial product across the globe. It is also a highly effective appetite suppressant.

PhenQ has an ingredient profile to rival and better virtually of its competition – no matter how you dress the product up and advertise it, it is is results that define a product.