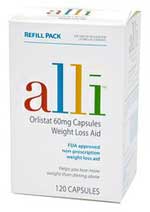 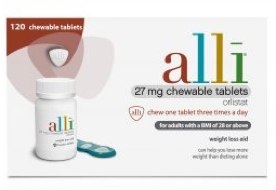 Alli is a reduced-strength (60mg) version of the prescription-only weight loss drug Orlistat (120mg). Unlike Orlistat, Alli is available as an over-the-counter weight management option and can be easily purchased by anyone who is over 18-years of age and believes it may provide their ticket to a slimmer figure.

Doctors only prescribe Orlistat for people who have managed to pile on a poundage sufficient to provide them with a body mass index (BMI) of 30 or more and also have other health issues that make their obese condition particularly endangering to their wellbeing. The drug is designed to be used in conjunction with a calorie controlled diet and regular exercise. The prescribing doctor will usually advise on this and monitor their patient’s process. Alli is supposed to be used in a similar manner, but the lack of a doctor’s intervention may result in users trying to rely on the drug alone or attempting to use it as a safety net to help them pursue unhealthy dietary practices without paying the price.

How the Drug Works

Like Orlistat, Alli encourages weight loss by limiting the amount of dietary fat that is absorbed via the intestines. It achieves this by disrupting the natural function of a digestive enzyme (lipase) that breaks down dietary fats ready for immediate use or storage as fat. This process Alli uses is often called “fat blocking” and the drug “blocks” around 30% of consumed fat. The fat that cannot be digested then passes through the intestines and is passed with the stool and, not surprisingly, the stool is apt to become more greasy and soft than would normally be the case. 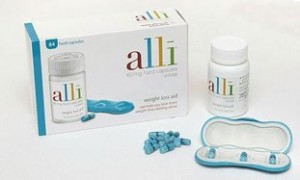 Each gram of fat contains nine calories, so in theory the weight loss provided by Alli should be good, but the weight loss most users experience is usually pretty modest and unlikely to be very much more than is attained by diet and exercise alone.

In a 2014 researchers evaluated the effect weight-loss pills had produced in studies that took at least one year to complete. The resulting data showed people who ate a calorie controlled diet, exercised on a regular basis, and took Alli lost an average of 5.5 pounds more than people who relied on diet and exercise alone.

Usage Guidelines  – One (60mg) pill can be taken up to three times per day with any meal that provides dietary fat and the manufacturers of the drug recommend a fat intake of 15g per meal. When the meal is unlikely to provide much fat the pill may be skipped because there will be nothing for it to work upon. On the other hand, users who try and use Alli as a cheat pill and consume meals that are overly high in fat may live to regret it because this can result in intestinal discomfort and/or soiled underwear.

Common side effects associated with Alli include

Some less common side effects include back ache, headache, and respiratory infections.

Alli may be an easy product to get hold of in some countries, but its availability is somewhat of a concern because it can react with some medications and is not a suitable weight loss option for anyone who suffers from certain medical conditions. This includes diabetes, thyroid problems, irregular heartbeat, and cardiovascular disease. Other user groups that should avoid the drug include pregnant or nursing mothers, people who have received an organ transplant, and people who have problems absorbing their food.

There are also worries that Alli usage may result in liver damage, so all users are advised to desist from using the drug and contact their doctor if they experience any symptoms that could indicate impaired liver function.

Some common symptoms of liver damage include:

Where To Buy Alli

There are some third party stockists that sell Alli to Australia – we do not however vouch for their validity.

Alternatives That Are Recommended

Alli offers a fat blocking mechanic of action. It is without reasonable doubt that it does this to good effect. Alli is relies on just this process and is starting to look very dated compared to later products such as PhenQ.

PhenQ can also block dietary fat – but it can also help to burn excess accumulated body fat, suppress appetite and act as an anti-oxidant.